The aims of the RE Department

Religion is about exploring and understanding the world around us. Religion has always been with us. Throughout history, it has expressed the deepest questions human beings can ask, and it has taken a central place in the lives of virtually all civilizations and cultures. RE allows students to explore ultimate questions such as: Why are we here? Where does evil come from? What happens when we die?

In modern times religion may not be so obviously prominent in the lives of many, yet the claims of religion continue to persist even as scientific and non-religious perspectives have become ever advancing. We still find religion everywhere, on television, in film, in popular music, in our community. We discover religion at the centre of global issues and cultural conflict. We see religion in the lives of the people we know and love, and in ourselves, as we grow and discover the person that we are.

Overall, religion is a powerful and persistent part of humanity. It provokes intense debate and critical questions, after all each and every one of us wants to know more about the world around us and ultimately what our the meaning and purpose is amongst it all.

Through the study of RE you will be able to make direct observations about the world around you, you will learn how to think critically and form philosophical questions, you will gain a cross-cultural understanding of the beliefs and practices that are ever increasing in modern society.

In Year 7 students begin the year with an introduction to the historical and geographic links between the major world religions of Buddhism, Christianity, Hinduism, Islam, Judaism and Sikhism. We look at the key facts of each such as the founder, sacred text and place of worship. We then study Christianity, Islam, Hinduism and Sikhism in greater depth across the rest of the year. 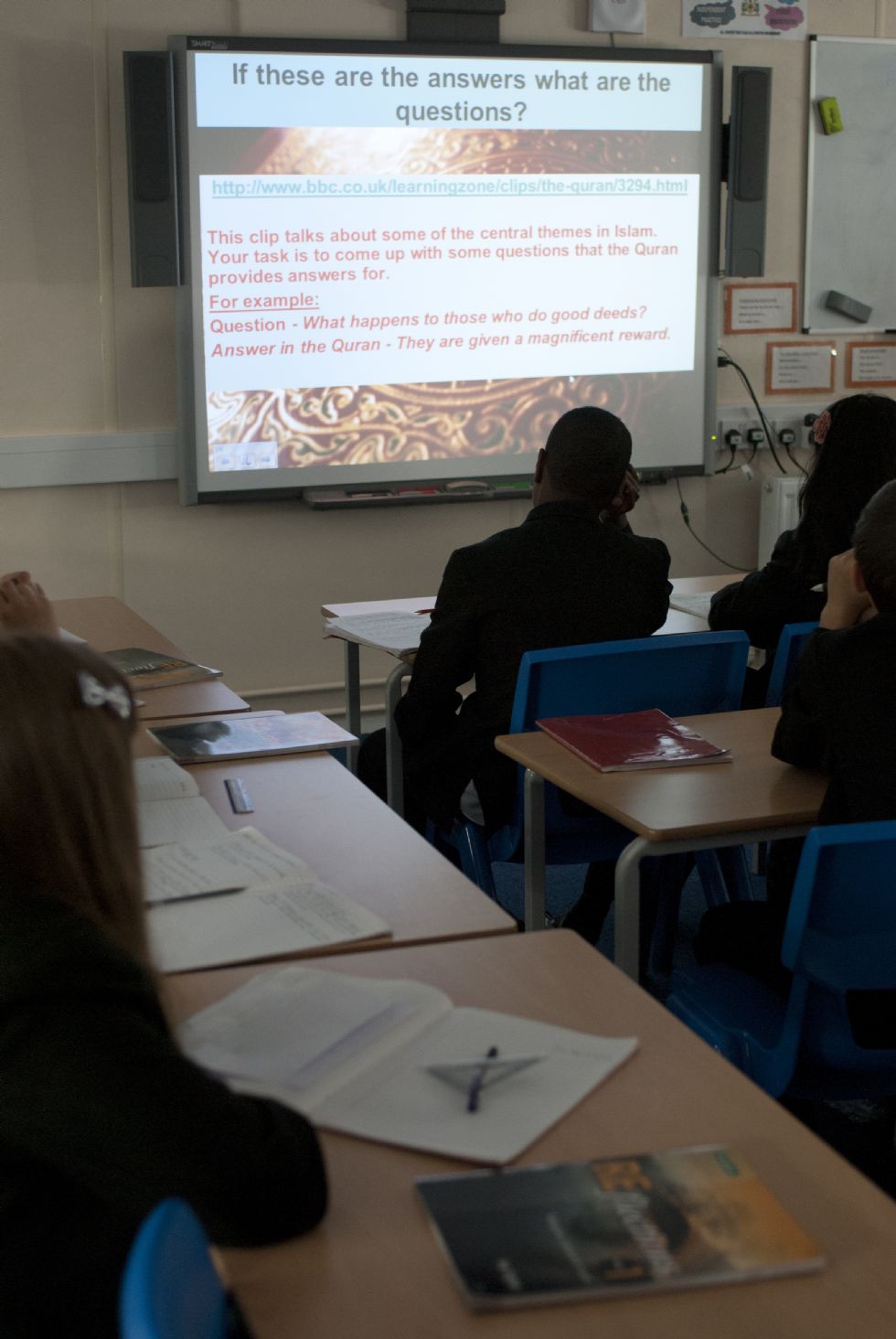 In Year 8 students will begin by studying the ethical subject of discrimination and prejudice, learning how religious and non-religious people respond to the issue. We then move on to explore Judaism, looking at the core beliefs, festivals and practices. Next we look at religious attitudes to the environment and the ethical debate about our responsibility as humans towards planet Earth and our treatment of other animal. Our final topic of the year is an introduction to Buddhism.

In Year 9 students will begin by exploring a range of New Religious Movements and learn to distinguish these movements from ‘Cults’. We then look at the concept of Life After Death from various religious and non-religious perspectives. The next topic of Year 9 is Ultimate Questions and Contemporary Ethics. This introduces students to arguments for and against the existence of God, the nature of reality and the problem of evil, before moving on to look at contemporary issues around marriage, divorce, same-sex relationships and euthanasia. Our final KS3 topic is Philosophy on Film where we apply a wide range of philosophical ideas from Marx, Stirner, Nietzsche, Plato and Locke to In Time and The Truman Show. Drawing on media sources as a stimulus for discussion and analysis.

The GCSE course focuses on the study of beliefs and practices Christianity and Islam as well as the application of Christian philosophical and ethical views to issues in the world today.

We carry out an in depth study on the beliefs and practices of Christianity and Islam, looking at: views about the nature of God; how worship should be performed; how births, deaths and marriages should be marked; the significance of pilgrimage within both religions among other key concepts of both religions.

The contemporary world paper covers four real world issues of Families and Relationships, Peace and Conflict, Existence of God and Religion in a Secular Society. These wide ranging issues allow us to compare and contrast ethical views within Christianity and bring in our own views to help us critically evaluate the place of religion in today’s world.

The A-Level course focuses on the disciplines of The Philosophy of Religion, Introduction to Ethics and Islam as our selected religious component. The Philosophy of Religion covers key philosophical concepts such as proofs for the existence of God, challenges to God’s existence, the study of Religious Language and how we can determine the meaningfulness of any statement we make and finally the arguments and issues surrounding miracles.

Introduction to Ethics looks at key ethical theories from the Ancient Greeks right up to those shaping moral philosophy today. We study the teleological ethics of Bentham, Mill and Fletcher before moving on to study the deontological theories of Aquinas, Finnis and Hoose. We apply these theories to a wide range of ethical issues from the treatment of animals through polyamorous relationships to issues surrounding euthanasia and the debate surrounding dying with dignity. We also look at the concept of freewill and determinism in order to assess if we can be held morally accountable for any of our actions.

The final component is the study of Islam. We look in depth at the key beliefs of Islam and assess the sources of authority for Muslims and how these sources of authority guide Muslims in their beliefs. We study the response of Muslims to challenges in contemporary society including secularism, the presentation of Islam in the media, issues around gender equality. Study Islam at A-Level gives students the opportunity to be analytical, critiquing beliefs and practices to develop a truly deep understanding not only of Islam but of the contemporary debates between revisionists, reformists and traditionalists which shape the religion today.

Students who have studied A-Level Religious Education have gone on to careers in politics, the civil service, law, the police, medicine, education and many more.